Breaking news is a form of journalism specifically targeted towards an online audience. Covering such events is intended to be done in the timeliest manner and shared on as many platforms as possible. When the district announced a new schedule to make up school days to parents, I published a story on the changes only a few hours later. This was then shared on all social media platforms in either graphic or URL form.

This districtwide procedure includes extending school days through the rest of the year and adding a half day to the district calendar, among other components.https://t.co/eNtdowRdok

ICCSD Superintendent Steve Murley announced a districtwide plan for making up missed school time due to inclement weather on Friday, Feb. 8. Here is an outline of the changes being made to the calendar. Changes will be implemented beginning Monday, Feb. 18.

This districtwide procedure includes extending school days through the rest of the year and adding a half day to the district calendar, among other components.

The ICCSD currently operates under a calendar that meets the state-mandated 1080 hours of instructional time. While the 2018-19 calendar originally had 1129 hours, missed teaching time caused the district to fall under this requirement if the calendar remained the same.

In an email to parents, Murley said, “We have evaluated our options and have come up with a solution that should be least disruptive to family schedules while still allowing for us to recapture that important instructional time with students.”

Resultantly, several changes were made to the district schedule.

Starting on Monday, Feb. 18 and continuing through the end of the school year, 10 minutes will be added to the school day. The elementary schedule will run 7:55 a.m. to 3:05 p.m. every day except Thursday, which will last until 2:05 p.m. Meanwhile, junior high and high schools will operate 8:45 a.m. to 4:05 p.m. other than Thursdays, which will run until 3:05 p.m. In short, this plan adds five minutes to the beginning and another five to the end of current district school day schedules.

Students will attend school on Friday, April 26, which was previously a ‘“No School” day.

The district will also add a half day of school at the end of the current calendar year on Friday, May 31. On this day, elementary students will release at 10:55 a.m., while junior high and high school students will end at noon. This will not apply for seniors, who will still end on May 23 as expected.

In order to balance the number of days per trimester, the end of second trimester will move from Wednesday, Feb. 27 to Friday, March 1. This also moves the scheduled “No School/Parent Teacher Conference” day to Monday, March 4. The West finals schedule will shift two days later than the current plan to reflect this change.

Laying it all out

Web design allows individuals the freedom to experiment with different story layouts. For longer stories with several different parts, however, it is difficult to find a structure that will encourage the website visitor to keep reading. My co-writers and I faced this issue with our story “Uprooted.” 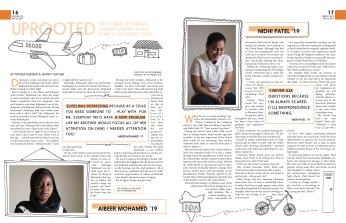 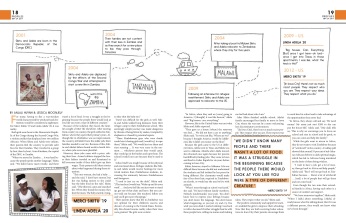 This story was originally published in the September 2017 print issue of the West Side Story on Sept. 29, 2017. Our staff tries to put all print content online when the issues come out; however, it is often difficult to do so with longer stories.

We experimented with the Student Newspaper Online chapter-container template, and the story became a lot clearer to read. This story’s layout was later featured in “The SNO Report” on Feb. 28, 2018. In order to best tell certain stories, it is important to include elements from varying extraneous media forms. For my story titled “Keeping her father alive: how a ‘suburban dad’ and Charles Barkley impacted a nation,” I embedded several forms of media into our school website. This was published on Feb. 5, 2019.

Here is a glimpse at what the final product looked like, including an embedded podcast, pull quotes, featured images, Twitter posts, and a chapter-container layout:

To read the full story, visit the “Writing – Features” category.