It is no secret that the news media industry is consistently under attack. From “fake news” claims to overt death threats, journalists have become a target in recent times. As a student who wishes to pursue this “dangerous” career, I was alarmed with the hatred being perpetuated. Thus, I composed an opinion column explaining the purpose of the news media and why spreading truth should be no person’s foe. This opinion was centered around my time at the 2018 Al Neuharth Free Spirit & Journalism conference.

“We are not your enemy” was published on Nov. 28, 2018. This column was featured in The Cedar Rapids Gazette and received a “Best of SNO” award.

“We are not your enemy” by Anjali Huynh

In a time when the media is under attack, reporter Anjali Huynh explains how a trip to Washington, D.C. showed her why pursuing journalism is more important now than ever.

The gunshots ringing through the newsroom at the Capital Gazette this past summer struck more than five fatal victims. Those shots ignited fear in the hearts of every working or aspiring journalist in the country as this horrific event confirmed our worst fears: the war on the media was no longer a verbal threat but a very real, physical possibility.

Time and time again, the president of the United States has threatened the press. Donald Trump, a man considered the leader of the free world, explicitly said, “The FAKE NEWS media … is the enemy of the people.” These words have since sparked hatred towards a group striving to inform the public on their surroundings. Resultantly, the United States’ current climate consists of one in which others belittle opinions that dare to differ from their own and blatantly dismiss the truth.

Being told that journalism is considered a “dangerous” job would send any sane-minded person running. As an aspiring journalist, I had my doubts about pursuing this supposedly unstable, threatening occupation. After all, journalists are not known for having financial stability, nor for having simple jobs. However, little did I know that the answers to my pervasive doubt lay in a conference that would shift my entire life course.

The Al Neuharth Free Spirit and Journalism Conference is a five-day, all-expenses-paid event in Washington, D.C. that brings together journalists from around the country. This event takes place in June and is named after the founder of USA Today, Al Neuharth. Each year, after hundreds of rising high school seniors from around the nation submit applications, the Freedom Forum Instituteselects one student from each state and the District of Columbia to attend this prestigious event.

Applying was a long shot, to say the least. After all, surely there were far more talented journalists in Iowa than I. Yet two months after applying, I glanced down at my phone one day to see an email with a subject line screaming “WINNER.” Beyond thrilled, I spent the next two months dreaming about having the honor to represent the state of Iowa at a national conference.

On June 16, I entered the Eastern Iowa Airport, bags packed and ready to board my flight. Never before had I flown on a plane alone or attended an event without anyone I knew. Though these feelings were mildly jolting at the time, it was nothing compared to the experiences and people that awaited me in the nation’s capital.

For five days, we heard from the best and brightest of the journalism world: Pulitzer Prize winners David Fahrenthold and Sara Ganim, “Meet The Press” host Chuck Todd, New York Times photographer Doug Mills and former press secretary Mike McCurry, to name a few. And with each new person that spoke to us, I gained more insight on the importance of journalism. From uncovering Trump charity discrepancies to dealing with the aftermath of the Bill Clinton scandal, these individuals saw history happening before their eyes and were the first to tell its stories.

As I listened to these icons, toured D.C. and ate ridiculously fancy food, I pondered my future. I had asked each speaker the same question, regarding whether the Trump administration’s words and actions ever deterred them from pursuing journalism. To my surprise, they answered rather similarly, saying that because we are under attack, it is more important now than ever to be a journalist in this country. Considering this, I asked myself, “Why would I not want to be part of this great legacy of storytellers and truthseekers?”

But what was most instrumental in solidifying my path were the students I met. In those magical five days, I found myself surrounded by 50 of the most talented, hardworking and genuine high schoolers in the nation. Despite our different upbringings and viewpoints, we united towards a common cause of speaking truth and uncovering the untold. In a time where the credibility of journalists is consistently undermined, these students demonstrate the integrity and drive of professionals. Their ambition and ingenuity inspires me to work harder, to pursue my passion even when others tell me I’m crazy. So long as they are out there, journalism will never die.

Since the formation of this nation, the news media has remained an integral part of American society. After all, freedom of the press is stated in the very first amendment of the Constitution. It is considered the fourth estate of government, where people turn to when they don’t know who to trust or what’s going on. For this reason alone, we are not the enemy of the people. It is more clear than ever that the American people need the news. They need the fact checkers, the news writers, the photographers and videographers and all the rest to hold others accountable and to share the voices of those silenced.

When first seeing the Neuharth quote, “Dream. Dare. Do.” displayed on our bright blue conference t-shirts, the phrase meant nothing. Now, it means everything. This advice from Al Neuharth represents what a journalist’s role truly is. We are not fear mongers or vulgar liars; we are human beings that push boundaries and work to make a difference.

So to all the journalists out there, I encourage you to keep dreaming, keep daring and keep doing. The work you do is valid. You are not the enemy of the people. Now, perhaps more than ever, the world desperately needs free spirits fighting to tell the stories that others do not want told.

Call me by my name

Having a name like “Anjali Linh Huynh” inevitably means others are going to mispronounce my name. It was a simple reality that I had grown accustomed to. However, over the course of my education, I began to notice that many individuals made no attempt to pronounce my name at all, or, if I corrected them, they would revert back to incorrect mispronunciations again. Hearing similar remarks from other classmates with foreign names, I wrote a column on why mispronunciations are more negative than one might think.

The original article was published on Dec. 22, 2019 in the print edition of the West Side Story. Students responded well to this column, as many could relate to the sentiments expressed. 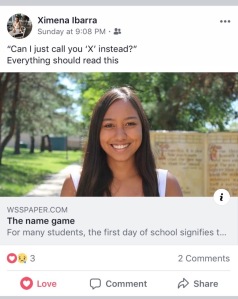 “The name game” by Anjali Huynh

Reporter Anjali Huynh outlines why correctly pronouncing names should be more of a priority in American society.

For many students, the first day of school signifies the beginning of a new grade, the chance to begin a period of educational promise and renewed social growth. While these feelings remain true for me, the ringing of the first bell always inevitably brings forward one thought: How will my new teacher butcher my name this time?

To put it mildly, Anjali Linh Huynh is not a common “American” name. Having Vietnamese and Indian heritage, my parents gave me a name that paid respect to their backgrounds. I have never been ashamed of this. Because my upbringing lacked customary Asian traditions or nearby relatives, I often fell back on my name as a reminder that my ethnic identity was valid.

Yet the same thing that gave me a sense of pride and individuality transformed into a weapon others used against me. Though neither I nor my parents changed my name, others decided to undertake this task themselves. My “foreign” name becomes nothing short of a guessing game, an inconvenient tongue twister for the reader to stumble over.  While my name is supposed to be pronounced “Uhn-juh-lee,” I have been called anything from “On-jolly” to “Ann-jol-eye” to even names as baffling as “Angela.”

To some degree, I understand unintentional mispronunciations. After all, making mistakes is a part of human nature. However, the biggest offense is the lack of effort when it comes to respecting non-traditional names. It is not so much the initial mispronunciations that are disturbing, but rather, the lack of effort involved. Oftentimes, others take a look at my seemingly-difficult name and give up before they even start. Or, after I clarify the pronunciation multiple times, they still mispronounce it until I ultimately feel too defeated to care.

As a result of constant errors, many people with non-Western names, including myself, adapt to a toxic culture of ignorance. This often involves completely changing names to make them “easier” to pronounce. When I said my name at coffee shops or clothing stores, little expressions of frustration or sighs of disapproval appeared, followed by a rude, “And how do you spell that?” Now, I often resort to saying that my name is “Anna” to avoid inconveniencing employees. Similarly, many of my friends westernized their names themselves, going solely by “English names” rather than birth names.

What I came to realize, however, was that by doing such things, we give up a part of our identities solely for the comfort of others. As someone who is already isolated from my ethnic culture, this forced assimilation feels like betrayal. Dismissing name mispronunciations as insignificant or part of the status quo is incredibly ethnocentric.

When names are deemed “too difficult” or “too foreign” to pronounce, what this really means is that others do not care about the individual’s culture to begin with. Suggesting that a name is challenging because it is different implies that people get a pass to blatantly disregard correct pronunciation because a name is alien to them. Continuing a tradition of accepting ignorance and indifference does not better the community; instead, it hinders a potential learning opportunity.

A person’s name is as integral to their identity as the gender they identify with or the color of their skin. It is the first thing people learn when meeting a new person, the first form of identification that people know. The standard should not be having students adapt their names to fit others’ standards or allowing others to continue failing to pronounce names correctly. Instead, individuals should consider the respect they would like to see with their own names and apply it to others.

Being understanding and accepting of other cultures remains a difficult task for many, especially given the current climate in this country. Kindness and respect are attributes that others should be willing to ingrain into their everyday routines. Anyone can adopt these characteristics in a manner of ways through showing regard for other names and building respectful, culturally-aware communities. Simply asking someone to clarify how to correctly pronounce their name can go a long way.

So the next time, dear reader, that you stumble across a name that seems to require a manipulation of your tongue in a manner you think not to be possible, I advise you to look again. Each pronunciation, no matter how seemingly insignificant or irrelevant in the grand scheme of things, does matter. I can assure you that these individuals will be grateful for the time and effort exercised in doing so.